Sebastian Black was a junior at Northview Public High School when some unexpected curveballs from life left him questioning his future, struggling in school, and unsure of his ability to graduate.

So his senior year, Sebastian was transitioned to Northview Next Career Center, an alternative learning campus designed for high school students who, for various reasons, haven’t found success at the traditional high school.

But forget the stigma you may have around the idea of alternative learning, because the life-changing experience Black had at Northview Next may just be the greatest story you read this year.

Or as he puts it, “Expect the unexpected.”

A Different Kind of Classroom at Northview Next

Sebastian Black recalls driving by the Career Center – a campus made up of three portable buildings – just days before his senior year started. He was plagued by uncertainties: whether or not he’d secure enough credits to graduate, what his courses would be like at this new campus, or what his future would hold.

He enrolled in the manufacturing program, housed in the most newly-renovated building of the three on campus. It was the first year the program was offered, so Black was unsure what to expect. But upon entering the building, he was ignited by a spark of hope. 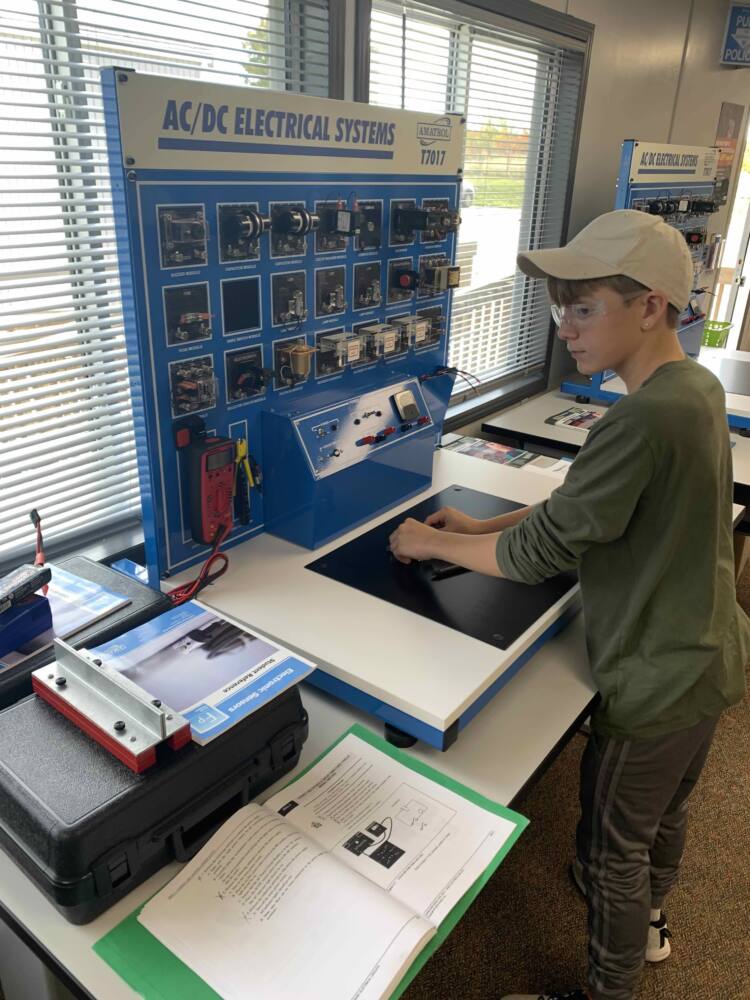 It was like walking into a real-life advanced manufacturing facility. The lab is filled with cutting-edge systems featuring Amatrol electrical, mechanical, fluid power and mechatronics technologies. The ceilings show all the industrial piping for compressed air. The tables, chairs and furniture are all new. Even the air conditioning system is new. Unlike any traditional classroom, entering the Career Center is like walking into heaven for hands-on learners.

Northview Next Director Drew Klopcic led a team to dream up this manufacturing program and bring it to life at Northview. The physical space was a huge factor in engaging students who have felt disenfranchised from traditional education. So Northview partnered with ATS Midwest to outfit the lab with high-tech, advanced manufacturing training systems.

“You walk in and it looks like you’re walking into more of an industrial site. We wanted it to feel different, to look different for our students,” he remarked.

That first moment of impact is key to engaging these students, and as a result, they may experience an excitement to learn for the first time in their lives.

The beautiful lab is just the icing on the cake. The real value of the Northview Next program is how it takes these non-traditional learners and fully prepares them for successful lives after high school.

“99% of our students come here because they want to work with their hands. They’re not four-year university students. They’re looking to either go right into the workforce or go into a trade school or maybe get an associate’s degree,” Klopcic added.

Drew and his team created a comprehensive program that not only gets students through graduation day, but also equips them with all the soft skills, life skills, certifications and portfolio to make a strong career transition out of high school.

Let’s walk through the components of the manufacturing program that students like Sebastian Black experience:

The core of the program is the curriculum itself, which is grounded in the competencies most in-demand in the industrial workforce today. Students do eLearning followed by hands-on skills – taking the theoretical knowledge and immediately putting it to work in the lab. Again, this is where the partnership with ATS Midwest came into play. The teams converged on the right set of competencies and built a curriculum that would deliver the right knowledge and skills for the most in-demand careers in manufacturing.

“The students love being able to do something more hands-on…that’s what they’re geared towards. It’s where they excel,” said Klopcic. The students are thriving in an environment that’s built for them, to inspire and equip them for what comes next.

Students can earn certifications from the Smart Automation Certification Alliance (SACA) for going through these courses. These credentials are proof-of-skills around technologies like mechatronics, industrial controls and other advanced manufacturing systems.

Northview sits just on the outskirts of Grand Rapids, Michigan, home to Grand Rapids Community College. The college teaches the same SACA-aligned courses, so students pursuing a technical diploma or associate’s degree can easily transition to SACA-focused programs at GRCC.

Northview Next partners with Jobs for Michigan’s Graduates, the statewide entity that’s part of the national nonprofit Jobs for America’s Graduates. This program provides curriculum that covers over 80 life-and-career skills like resume building, cover letter writing, interview techniques, financial guidance, budgeting, and more. These are skills designed to enhance any student’s experience, no matter what career pathway they may pursue.

The last and key component of the Northview Career Center is its partnership with area employers. In fact, it was through Jobs for Michigan’s Graduates that Drew Klopcic got connected with the team at Amway, a well-known worldwide company headquartered in Michigan, that went above and beyond to partner with Northview Next. It was through this partnership that Sebastian Black’s life would be changed for the better.

The Next Step into a Manufacturing Career

Sebastian spent his senior year in that manufacturing lab, gaining skills, friends, and a perspective he never imagined a year ago.

He reflected on the experience: “They sent me here to recover and get back on track. But it ended up being way more than that. It became a second family here and gave us opportunities that I never even knew existed in schools.”

The biggest of those opportunities came at the end of the year – the chance to interview with Amway and step into a career directly related to everything the students had been working toward.

For weeks, Black and his classmates prepared for their interviews. They prepped resumes, wrote cover letters, and sat through mock interviews in class. 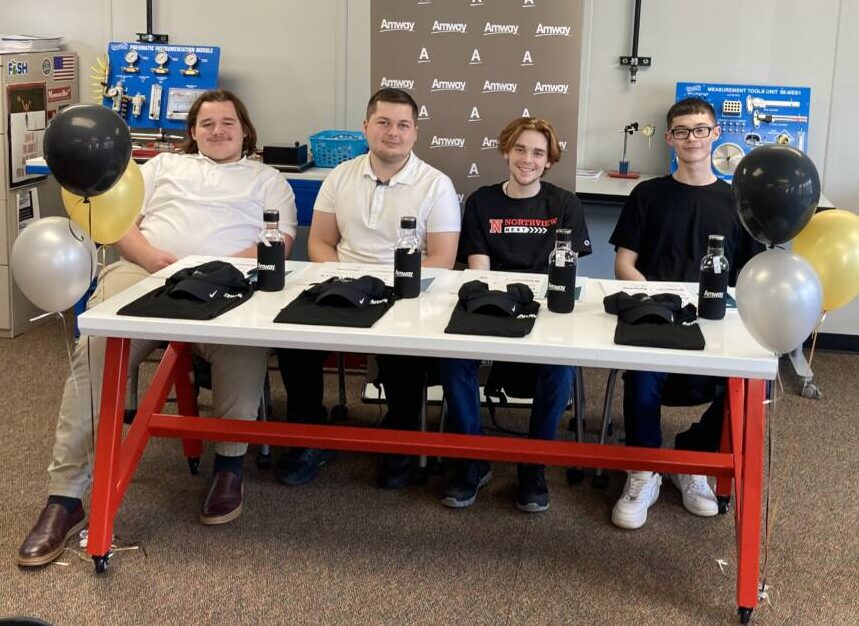 Four Northview Next seniors are offered jobs at Amway

On the big day, more than 20 Amway employees, from technicians to directors, traveled to the school to interview the participating seniors one-on-one. These 45-minute interviews could be intimidating for a teenager who’s first exposed to the experience, but Black enjoyed the process. He noted that it was “more like a conversation with somebody.”

What happened next really makes this case unique – and is something employers should pay close attention to as they develop partnerships with their local districts.

After the individual interviews, the Amway representatives gathered together to discuss each student’s particular skillset, aptitudes, interests, certifications and career goals. They came up with two or three different jobs in different departments that would best suit the individual. Then, they sat down with each student and offered them a role at Amway, with the unique offer that the student would get to pick the job they most preferred from the selection the Amway committee created for them.

He was drawn to the role because it will allow him to work on many of the electrical systems that were his favorite part of the curriculum at Northview. In fact, he noticed how closely aligned his coursework was with the work he’d be doing at Amway:

“SACA is a big program…it really helped a lot when it came to Amway because like 90% of what they do is what we learned here.”

But what solidified his choice was the advice from an Amway employee. This individual encouraged Sebastian to take the job because of the opportunities it would provide to move upward within the company.

That’s a huge doorway of possibilities for someone just exiting high school. Klopcic remarked that most 18 or 19-year-olds don’t get this kind of opportunity; it’s a unique program that gives students access to career paths they never imagined.

Black’s family agrees. In fact, Sebastian shared that the day he came home from school with the Amway offer in hand, his father teared up thinking about how far he had come.

Looking back on everything that had happened in the last few years, Black can’t help but marvel at how it all came together. “Everything kept falling into place perfectly,” he said. “It felt like it was kind of meant to happen.”

A Little Risk, A Lot Of Reward

Programs like this don’t exist without stakeholders who share a common vision, do what no one else is doing, and take risks along the way. Klopcic credits his team, his administration, his instructor Brian Hendicks, the Jobs for Michigan’s Graduates team, and the incredible people at Amway for making the first year of the manufacturing program such a success.

“To create something unique like this takes a lot of people willing to risk some time and some money. But at the end of the day, it’s good for our kids. And now it’s going to help out the community at large.”

In year one, the manufacturing program had 32 students, and four of the graduating seniors interviewed with Amway. Now that the program has built a name for itself, Klopcic and his team are excited about the future.

They’ve already showcased the model to additional employers, post-secondary institutes and other K-12 districts, all who come away amazed. This is the time to replicate what’s being done at Northview across the state’s career centers.

Hendricks is already excited to make adjustments and see the program grow in year two and beyond.

In the future, the team’s goal is to offer some of these classes to the main high school, allow them to utilize the lab or even potentially offer night courses for community members who want to learn new skills or transition to a new career field.

For anyone looking to replicate this model, follow Klopcic’s example and dream big. Bring in stakeholders from education, industry and nonprofits. Create comprehensive programs that truly prepare students for a successful career transition and life-ready skills.

And help change the perception of alternative learning programs.

The Lesson: Ditch the Stigma and Embrace Non-Traditional Education

Sebastian Black is a student whose life was forever changed at Northview Next. Earlier we said to forget the stigma you may have around alternative learning or career and technical education.

Black agrees, and we’ll leave our readers with his advice for other students who are struggling with traditional education and who may be unsure of their future:

“I think more people should know about this kind of school. Before I came here, I was at the high school, and a lot of kids thought this was the place where all the bad kids go; this is where all the people who fail go.

But I think it’s just where people go when they decide not to give up, when they want to keep fighting for their future.

To learn more about Northview Next, visit: https://nvps.net/northviewnext/career-center/

ATS Midwest is Northview’s partner for SACA-aligned curriculum and hands-on training systems. If you’re interested in implementing a program like this at your school or career center, we’d love to meet you! You can easily contact us by filling out the form below.

When you're ready, complete the form below, and we will contact you in regards to your chosen products and/or services.
* Indicates required fields.